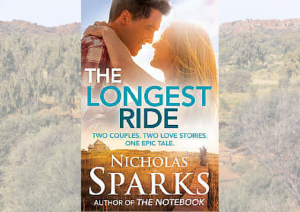 The time has come to write about Nicholas Sparks. Not because I have finished The Longest Ride – the apocalypse may come before that happens – but because I have read enough to know what I know, which is that he is awful, just awful.

Before I go on, here is my full disclosure: I have read roughly half of one of his books, and I am basing my entire opinion about him on this. I realise this is probably unfair, but that half a book has already given me a lot of say, and has cemented the fact that I will never read anything else by him, which makes this my only chance to vent, and what is my blog for if not to spout my useless and biased opinion?

I have seen a few Nicholas Sparks movies in my time, and I’d be lying if I said I didn’t enjoy them – he knows how to cast a male lead, I’ll give him that. Then I saw The Longest Ride and I gotta say, I didn’t love it. So, when it got picked for book club, I thought I was in for some trouble. Two pages into the book, and I knew I was in trouble. Aside from some really poor writing, poor plotting and poor characterisation, here are some of my main gripes about the book.

First of all, each chapter is written from a different character’s perspective, except that it’s not really because the whole book is written in the third person – so what’s the f-ing point of multi-perspective chapters? It’s not like we actually get any sort of insight into the character’s mindsets.

Seriously, in one speaking of her name she knew he would love her forever. FOREVER? Come on Sparks – I know it’s supposed to be a fantastical romance, but that’s just utter bullshit. (It’s possible my cynicism about this line says more about me than anything else…)

Last thing, and this is probably super silly but it really irked me, is the way he talks about Luke’s mum being really old…at 55. “She’s fifty-five years old. Where would she go? What would she do? Me, I’m young. I can go anywhere.” – like anyone over 55 should just forget about doing anything new and different with their lives?! Sparks himself is not far off that age, just quietly…

Anyway, given how painful this book was, I’m sure there’s no pun on the title that hasn’t been made yet, but it truly was the longest ride.