Two books for your TBRs

Ever noticed how the longer you put off doing something, the harder it gets to do it? Like the fact that my last blog post was three weeks ago, and every blog-free day since then has pushed me further and further away from the possibility of posting. So that’s where I’m at: putting off all productive activities and waiting for motivation to hit me in the face. Which it hasn’t, despite the existence of this post being evidence to the contrary. The truth is that I have just read two absolutely cracking books and I need to share them with you lovely, bookish folk.

First up was The Miniaturist by Jessie Burton.

This one took me completely by surprise – it has been sitting innocently on my shelf for ages, and I was mildly curious about it, but it never really jumped out at me. But it should have because it was brilliant. So much about this book rang all my bells – an interesting, historical setting, complex and diverse characters, a solid and believable premise with a little big of magic, a little bit of mystery and a helluva lot of heart.

It’s about a young, country girl, Nella, who moves to Amsterdam after entering into an arranged marriage with a man she has met only once. She has no friends or allies in the city, and the other members of her household are aloof at best. When Johannes, her husband, buys her a cabinet house, she engages a miniaturist to create replicas of every day objects that bring her joy, but instead they bring about unease and confusion; let the intrigue begin.

I have read a few reviews that said this book was implausible and unconvincing, and maybe this is true in parts, but mostly I just found it totally engaging, and the pictures that Burton paints of Amsterdam were beautiful and fascinating. I’m giving it 4.5 out of 5 miniature pieces of marzipan. 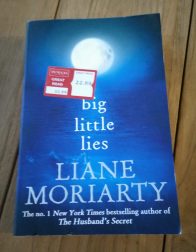 The second book (Big Little Lies by Liane Moriarty) I finished mere minutes ago and had to sit down and write about it straight away, although I don’t think I’ll be getting it out of my head any time soon. I realise I may be the last person in the world to read this book, but seriously, if there are some of you out there who haven’t read it yet, do yourself a favour. I put off reading it for a while because I didn’t love The Husband’s Secret, and I assumed this would be more of the same. Wrong again! This book was freaking wonderful. I genuinely almost missed my stop on the train every morning this week because I was so engrossed. I didn’t even engage in any of my usual people watching (which I LOVE doing) – this book just had me in its clutches, wholly and completely.

Moriarty creates this fascinating cast of characters that are all unique and deeply flawed but, for the most part, also deeply sympathetic. She used such care in writing these people that even through there were characters that I hated with a fiery passion, I was also able to understand their motivations. Whether or not I agreed with them was a completely different matter, but I never questioned whether they could be real people, acting in real ways. She has this incredible ability to capture all of the awfulness of real life, but portray it with humour and sensibility and sympathy. Seriously, I could gush all day about this book, but I won’t. I’m not even going to say anything about the plot, because it’s hard not to get spoilery and I think it’s one of those books that would be best to go into blind – if that’s even possible anymore given all the hype and the movie in the making. Suffice it to say, I loved everything from the first word to the last. This one gets 5 out 5 drunken school trivia nights.